The longer of two muscular heads making up the biceps femoris muscle is called the long head of the biceps femoris. It is part of the hamstring muscles in the posterior compartment of the thigh that flex the leg at the knee and extend the thigh at the hip. The hamstrings are the site of frequent muscular strains, as they are subjected to enormous forces during running and playing sports.

The tendon of the biceps femoris is easily located by touching the lateral side of the popliteal region and feeling for a tough cord of connective tissue. In fact, the name “hamstring” comes from the fact that when pigs are butchered to produce hams, the tendons of the hamstring muscles protrude from the knee joint like strings.

Unlike the short head of the biceps femoris that crosses only the knee joint, the long head crosses both the hip and knee joints to produce movements at both joints. At the hip joint, it pulls the thigh and leg posteriorly toward the ischium, working with the gluteus maximus to extend the thigh at the hip. Hip extension is a part of many activities, including standing up from a sitting position, standing still, walking, and running. At the knee joint, the biceps femoris flexes the knee by drawing the tibia and fibula posteriorly toward the ischium and the posterior femur. Knee flexion is important in many activities, including walking, running, and climbing stairs.

Hamstring strains, also known as a pulled hamstring, are common injuries affecting all hamstring muscles. These injuries usually occur during sprinting or in sports such as soccer and football. During sprinting, the hamstrings contract while the body’s weight and the contraction of other muscles (especially the quadriceps) simultaneously stretch the hamstrings. The net result is an incredible amount of force stretching the hamstrings, which can lead to muscle or tendon tears. Depending on the severity and location of the strain, these injuries can vary from short-term and mildly painful injuries to severe, painful, and long-lasting muscle tears. Proper conditioning and stretching before sprinting can significantly reduce the occurrence of hamstring strains. 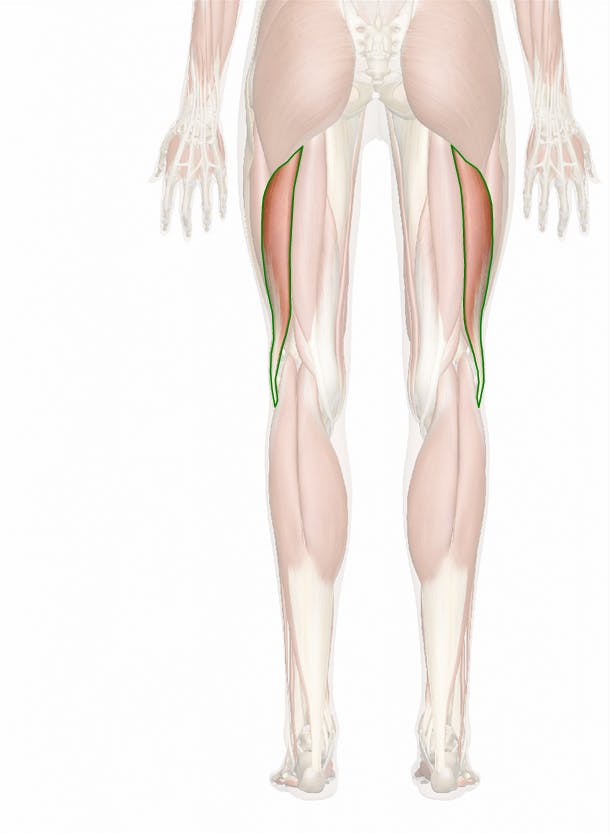