The axillary nodes are a group of lymph nodes located in the axillary (or armpit) region of the body. They perform the vital function of filtration and conduction of lymph from the upper limbs, pectoral region, and upper back.

The axillary lymph nodes are a group of twenty to thirty large lymph nodes located in the deep tissues in and around the armpit. These nodes are arranged into five distinct groups: pectoral (anterior), lateral, subscapular (posterior), central (intermediate), and subclavicular (medial). Continue Scrolling To Read More Below... 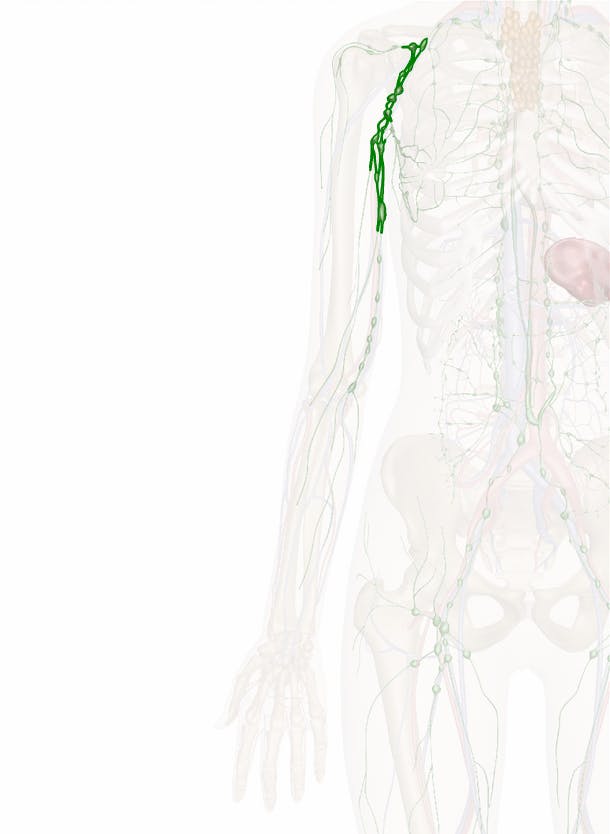 Lymph nodes are small organs in the lymphatic system. Their shape bears a resemblance to kidney beans. The exterior of each lymph node consists of a tough capsule made of dense fibrous connective tissue. Reticular tissue containing abundant lymphocytes and macrophages fills the interior of the lymph node. Lymph nodes serve as filters of the lymph that enters from several afferent lymph vessels. Reticular fibers in the reticular tissue work like a net to collect any pathogen or tumor cells in the lymph. The macrophages and T-lymphocytes then attack and kill these pathogens and tumor cells. Once the lymph has been filtered, it passes through efferent lymph vessels, which transport the filtered lymph out of the lymph node en route to the lymphatic ducts.

Lymph passes through several sets of lymph nodes to complete its filtration process, before flowing into larger lymphatic trunks. The subclavian trunks carry lymph from the axillary nodes through the torso to the left and right lymphatic ducts. Both lymphatic ducts return filtered lymph to the subclavian veins, where it becomes part of the blood plasma and returns to the heart for further circulation.