The jejunum is the middle segment of the small intestine found between the duodenum and the ileum. Most of the nutrients present in food are absorbed by the jejunum before being passed on to the ileum for further absorption. 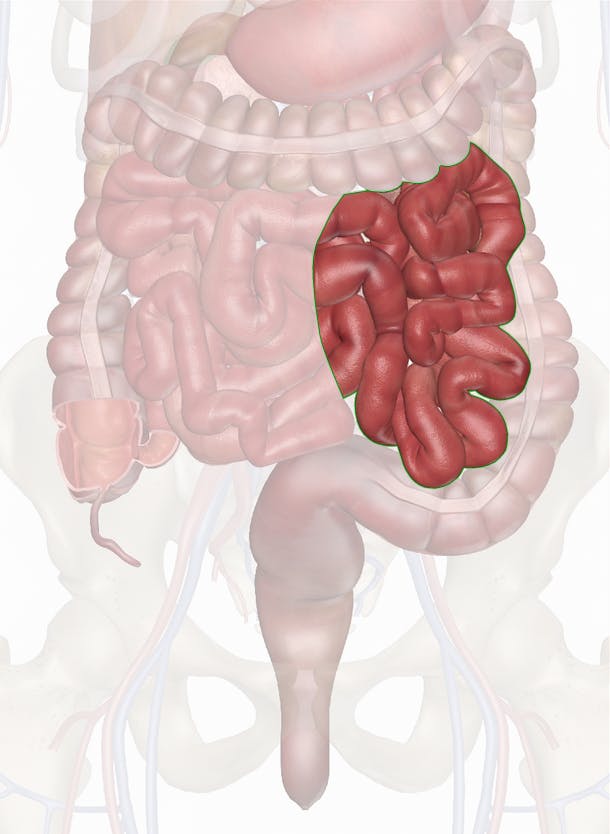 Continued From Above... From the duodenojejunal flexure, the jejunum follows a convoluted path through the abdomen before continuing as the ileum. While the jejunum does not have an anatomical landmark to separate it from the ileum, it slowly changes its anatomical structure along its length as it transitions into the ileum.

The jejunum is made of four distinct tissue layers that work together to give the organ its function.

The innermost layer, the mucosa, surrounds the hollow lumen and provides contact between the jejunum and chyme. It is made of folds of epithelial tissue specialized for absorption of nutrients. Many goblet cells in the mucosa produce mucus to protect the intestinal walls and to lubricate chyme passing through the jejunum.

Deep to the mucosa is the submucosa layer that supports the other tissue layers. Many blood vessels and nerves pass through the submucosa to provide oxygen, nutrients, and nerve signals to tissues of the jejunum.

The muscularis is the next layer of the jejunum that surrounds the submucosa and contains smooth muscle tissue. Contractions of the smooth muscle in the muscularis allow food to be mixed and propelled through the jejunum. Finally, the serosa forms the outermost layer of the jejunum and functions as the skin of the intestine. Serosa is made of simple squamous epithelial tissue and secretes a thin slippery liquid known as serous fluid. Serous fluid lubricates the exterior of the jejunum and protects it from friction between organs of the abdominal cavity.