The mandible, or jawbone, is the only movable bone in the skull. It is the strongest and most massive bone in the face. The mandible plays a vital role in many common tasks, including chewing, speech, and facial expression.

The mandible is one of the twenty-two bones that make up the skull and the only one of those bones that is not fused to its neighbors. It is often called the lower jawbone as it is located inferior to the maxillae, which contain the top row of teeth. Continue Scrolling To Read More Below... 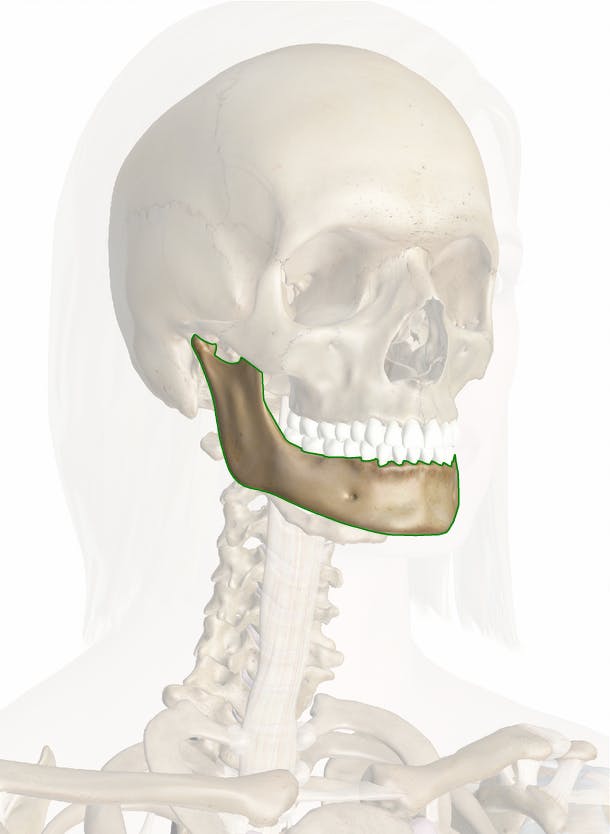 Continued From Above... Stretching from the left temporal bone to the right temporal bone, the mandible forms a flat arch with 16 teeth embedded in its superior surface.

At the left and right temporal bones, the mandible begins as a pair of bony cylinders known as the condyles. The condyles form the temporomandibular joints (TMJ) with the temporal bones before narrowing into the necks of the mandible. From the necks, the mandible widens considerably as it descends obliquely in the inferior and anterior directions to form the rami of the mandible. A large pointed projection, known as the coronoid process, extends superiorly from each ramus and is separated from the condyle by the mandibular notch. The mandibular foramina, a pair of holes for nerves and blood vessels to enter the mandible and support the teeth, perforate the rami on their medial surface just below the coronoid process.

At its inferior end, the rami turn almost ninety degrees anteriorly to form the body of the mandible. The body contains the alveoli, or sockets for the teeth, on its superior surface and a pair of prominent holes, the mental foramina, on its anterior surface. The mental foramina provide space for the mental nerves to pass through the mandible and innervate the tissues of the lower lip and chin. As the body of the mandible extends anteriorly from the rami on both sides, it forms an arch with the chin at its peak. A small bony ridge at the chin, known as the mental protuberance, extends anteriorly from the mandible to support the tissues of the chin.