The lingula is located on the anterior side of the left lung, inferior to the cardiac notch and superior to the oblique fissure. Continue Scrolling To Read More Below... 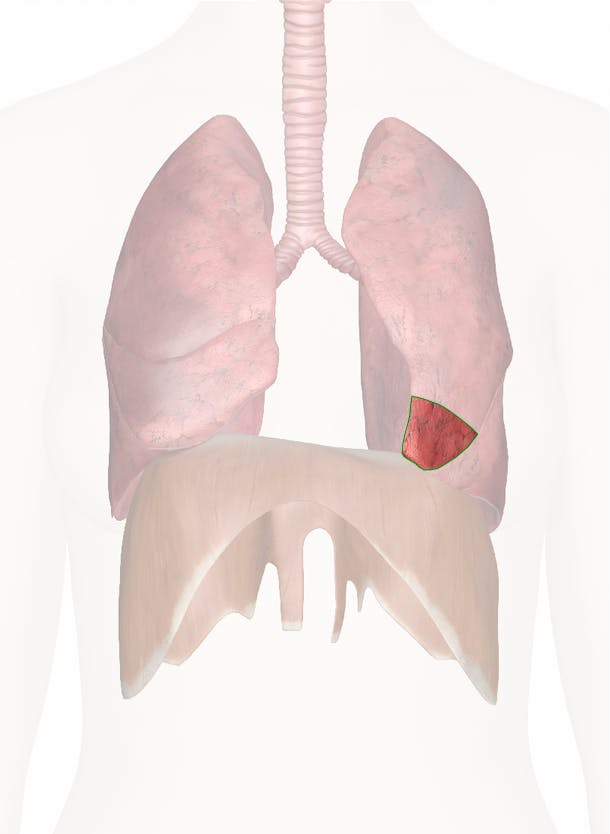 Air inhaled into the body enters the left lung through the left primary bronchus, which bifurcates into the superior and inferior lobar bronchi. Each secondary bronchus provides air to one lobe of the lung. The superior lobar bronchus further divides into four tertiary bronchi to provide air to each of the bronchopulmonary segments of the lobe. Two of the tertiary bronchi, the superior lingular bronchus and the inferior lingular bronchus, carry air to the lingula. Upon reaching the lingula, each tertiary bronchus further divides into many bronchioles to deliver air to all of the tissues of the lung. At the end of the bronchioles are many tiny cup-like hollows known as alveoli, which receive the air and serve as the functional units of the lungs. Blood passes through capillaries surrounding the thin epithelial walls of the alveoli, allowing exchange of gases between the blood and air. The net result of the interface between air and blood is the absorption of oxygen from the air into the blood and the release of carbon dioxide from the blood into the air. Air is then expelled through exhalation out of the body and replaced by fresh air during the next inhalation.