The right upper lobe of the lung is one of the three lobes that make up the right lung. The lung tissue of this lobe is responsible for most of the gas exchange in the right lung during calm, shallow breathing.

The right upper lobe of the lung is located in the right superior corner of the thoracic cavity lateral to the trachea and esophagus. It is superior to the horizontal and oblique fissures, which separates the upper lobe from the middle and lower lobes of the right lung. Continue Scrolling To Read More Below... 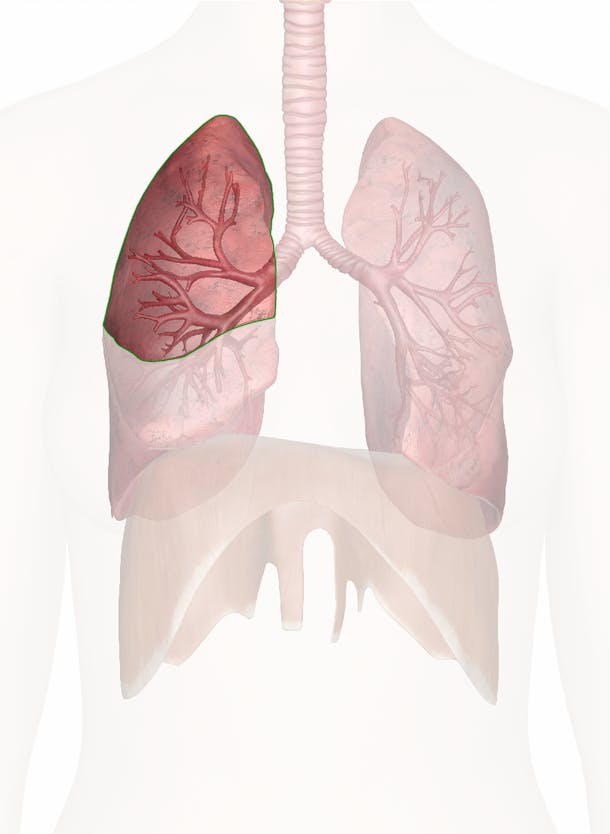 Air enters the root of the right lung through the right primary bronchus, which divides into three secondary bronchi. Of these three secondary bronchi, the right superior lobar bronchus extends superiorly to provide air to the right upper lobe. Inside the right upper lobe, the right superior lobar bronchus divides into three tertiary bronchi, which provide air to the three bronchopulmonary segments: apical, anterior, and posterior. The apical segment includes the tissue of the apex and extends medially to the root of the lung. The anterior and posterior segments constitute the anterior and posterior regions, respectively, of the inferior regions of the upper lobe.

Air inhaled during respiration passes through the upper respiratory tract and trachea on its way to the lungs. At the inferior end of the trachea, the primary bronchi separate to carry air to each lung. In the right lung, the air from the right primary bronchus is further divided between the three lobes by the secondary bronchi. The right superior lobar bronchus carries air to the right upper lobe, where it spreads through the tertiary bronchi into each of the bronchopulmonary segments. Each segment is filled with many tiny bronchioles, which spread throughout the lung tissue and further branch into terminal bronchioles. All of the terminal bronchioles end in a bunch of cup-like structures known as alveoli. Each alveolus is made of simple squamous epithelium surrounded by tiny capillaries.