The ear is a group of sensory organs in the head that collaborate to produce the sense of hearing. Together these organs perform the amazing function of converting sound waves in air into electrical signals to transmit to the brain. The ear also contains several special structures that produce the body’s sense of equilibrium, or balance. 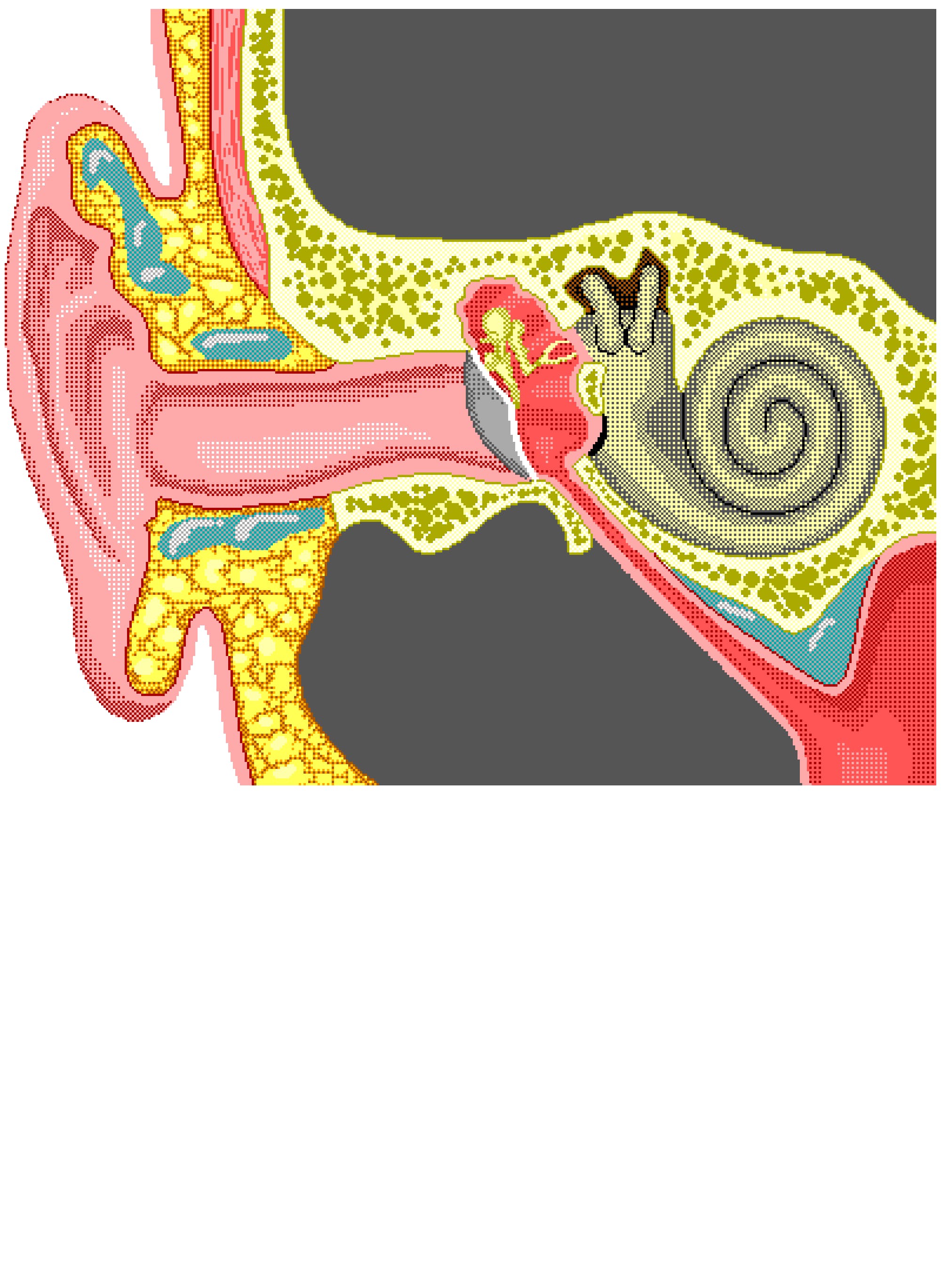 The middle ear begins at the end of the external auditory canal with the tympanic membrane, or eardrum. The eardrum is a thin, circular membrane spanning the interior of the auditory canal. It vibrates in response to sound waves.

The inner ear is the final section of the ear. It receives vibrations from the outer and middle ear; converts these vibrations into nerve impulses; and conducts nerve impulses to the brain. Within the inner ear is the cochlea, a spiral organ that contains many delicate hair cells for detecting vibrations. The cochlea acts as the functional sensory receptor of the ear. Nerve fibers from the vestibulocochlear nerve attach to the cochlea to transmit auditory signals to the brain.

Hearing occurs in the ear when the auricle conducts sound waves into the auditory canal and on to the tympanic membrane. The tympanic membrane acts like a microphone by converting the sound waves into movements of the membrane, which in turn moves the malleus. The malleus taps on the incus and the incus, in turn, taps on the stapes to conduct the sound as bony vibrations to the inner ear. Tiny muscles attached to the ossicles contract or relax to attenuate the volume of sounds passing through the middle ear. The stapes pushes on a small hole in the cochlea known as the oval window, which in turn creates tiny ripples in the endolymph liquid filling the cochlea. These ripples are detected by hair cells inside the cochlea that are arranged within the spiral to each detect a specific frequency of sound. Each hair cell is connected to a neuron from the cochlear branch of the vestibulocochlear nerve that transmits auditory information to the brain.

There are many causes for hearing loss and the experience is different from person to person. When hearing loss occurs, hearing aid devices can help people cope by restoring very high-quality hearing. These devices only get more sophisticated and effective with improved research and design. Unfortunately they can be very expensive, but recent developments have allowed some companies to significantly reduce cost. Read our MDHearingAid review for more information.

Static equilibrium — the sense of which direction gravity is pulling on the body — is detected by the otolithic membranes in the vestibule of the inner ear. Small calcium carbonate crystals embedded in a gel matrix on the surface of the otolithic membrane are pulled down by gravity and bend hair cells embedded in the membrane. The bending of these hair cells indicates which direction is down, and the nerves send this information to the brain through the vestibular branch of the vestibulocochlear nerve. As the head or body moves to a new position relative to the force of gravity, the otolithic membrane adjusts its position and sends new information to the brain.