Muscles of the Elbow

The elbow is a synovial hinge joint located between the upper arm and forearm. It is formed by the meeting of three bones: the humerus in the upper arm and the ulna and radius in the lower arm. Like all other hinge joints, the elbow permits movement in one plane, namely the flexion and extension of the forearm relative to the upper arm. However, the elbow also allows the wrist to rotate by pivoting the radius around the ulna. The muscles of the elbow cooperate to perform the many movements at the elbow joint, giving both great strength and flexibility to the arm. Continue Scrolling To Read More Below... 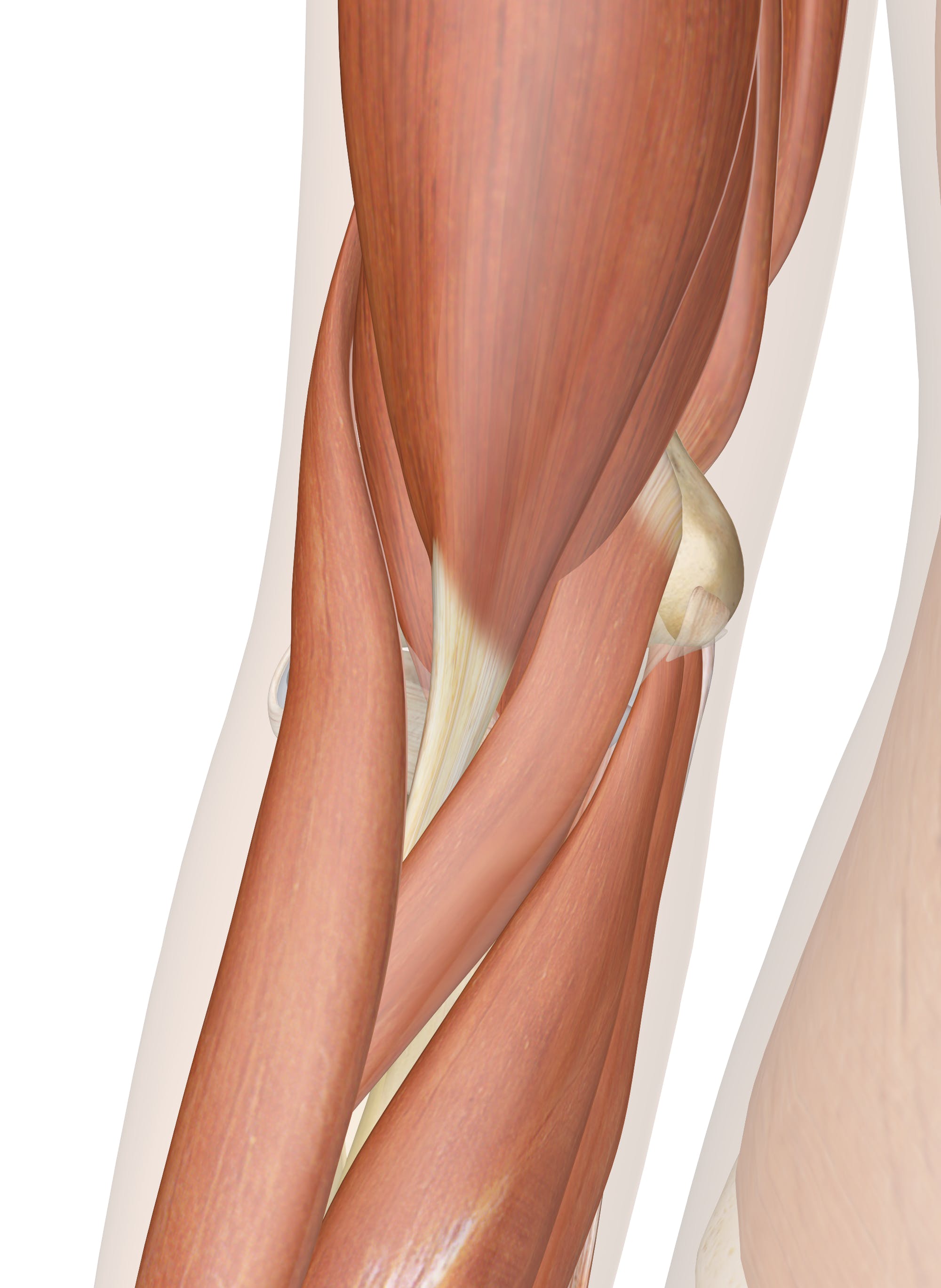 There are seven major muscles present in the elbow that flex it, extend it, or rotate the forearm. An additional nine muscles cross the elbow to act upon on the wrist and joints of the hand. These muscles can be broadly grouped into the flexor and extensor groups of the forearm.

The flexor group - including the brachialis, biceps brachii, and the brachioradialis - bend the arm by decreasing the angle between the forearm and upper arm. The brachialis is the primary flexor of the elbow and is found mainly in the upper arm between the humerus and the ulna. Superficial to the brachialis is the long biceps brachii muscle that runs anterior to the humerus from the scapula to the radius. The biceps mostly functions as a flexor at the elbow, but it is also able to supinate the forearm and turn the palm of the hand anteriorly. Although it is found mostly in the forearm, the brachioradialis is the third flexor muscle of the elbow, running from the distal end of the humerus to the distal end of the radius.

Nine more muscles of the forearm cross the elbow to move the wrist and fingers of the hand. The flexor group - including the flexor carpi radialis, flexor carpi ulnaris, palmaris longus, and flexor digitorum superficialis - have their origins on the medial epicondyle of the humerus and run along the anterior forearm to the palm of the hand and fingers. These muscles contract to flex the fingers as in making a fist and flex the wrist to move the hand closer to the anterior forearm. The extensor group - including the extensor carpi radialis longus, extensor carpi radialis brevis, and extensor digitorum - have their origins on the lateral epicondyle of the humerus and run through the posterior forearm to the back of the hand and fingers. Contraction of the extensor muscles extends the hand and fingers to open a clenched hand and extend the wrist toward the posterior of the forearm.

With so many muscles originating or inserting near the elbow, perhaps it is not surprising that the elbow is a common site for injury. One common injury is lateral epicondylitis (or “tennis elbow”), soreness of the forearm extensor muscles attached to the lateral epicondyle of the humerus. Repetitive strenuous contraction of the muscles (such as hitting many backhand strokes in tennis) causes strain on the tendinous muscle attachments, resulting in pain. Avoiding the repetitive exertion of these muscles usually brings recovery.