The skeletal muscles of the human body are organs with a specific purpose: contraction. Each skeletal muscle fiber contains filaments of actin and myosin that shorten the muscle and pull on tendons, which in turn pull on bones and move the body. These movements are described as pushes when the muscle moves away from the body or pulls when the muscle moves toward the body. Most muscles work together as a group with several other muscles to perform the actions that we associate with that muscle.

Every skeletal muscle is capable of only a limited range of motion. It can pull its insertion (connection to a movable bone) toward its origin (connection to a stationary bone). When a muscle moves a part of the body, it is known as the agonist or prime mover. After completing its contraction, the muscle relaxes and slowly returns to its original length but does not exert much force on the body. While the agonist relaxes, another muscle, known as the antagonist, can reverse the movement of the agonist and quickly return the body to its original position.

Some muscles are positioned to move both bones they are connected to, so the action of the surrounding muscles determines which end is the origin and which is the insertion. Muscles acting as stabilizers contract to hold a bone in a stable position, making it the origin for another muscle. The sternocleidomastoid muscle is an example of the effect of stabilizers as it can move either the head or the sternum. Normally the sternocleidomastoid flexes the head at the neck by pulling its origin on the mastoid process of the skull toward the sternum. But, when the trapezius and other muscles of the neck contract to stabilize the skull, contraction of the sternocleidomastoid elevates the sternum to aid in deep inhalation.

The final piece of the puzzle to understanding how muscles work is the lever system created by muscles, the bones they are attached to, and the joints that the bones move around. In these lever systems, the muscles act as the input force, the joint acts as the fulcrum, the moving bone acts as the lever, and the weight of the body part being moved acts as the load. Lever systems provide a mechanical advantage to either multiply the output force of a muscle at the expense of decreased speed and output distance or divide the input force to increase the distance and speed produced by the muscle. There are three types of lever systems in nature, and all three are found in the human body.

Third-class levers, like a broom, put the input force between the fulcrum and the load. These are by far the most common lever systems in the body, as they greatly increase the movement speed and distance of the load. Placing the load farther from the fulcrum increases the speed and distance of this lever system at the expense of strength. Examples of third-class levers include the biceps brachii flexing the forearm at the elbow and the quadriceps femoris extending the leg at the knee. 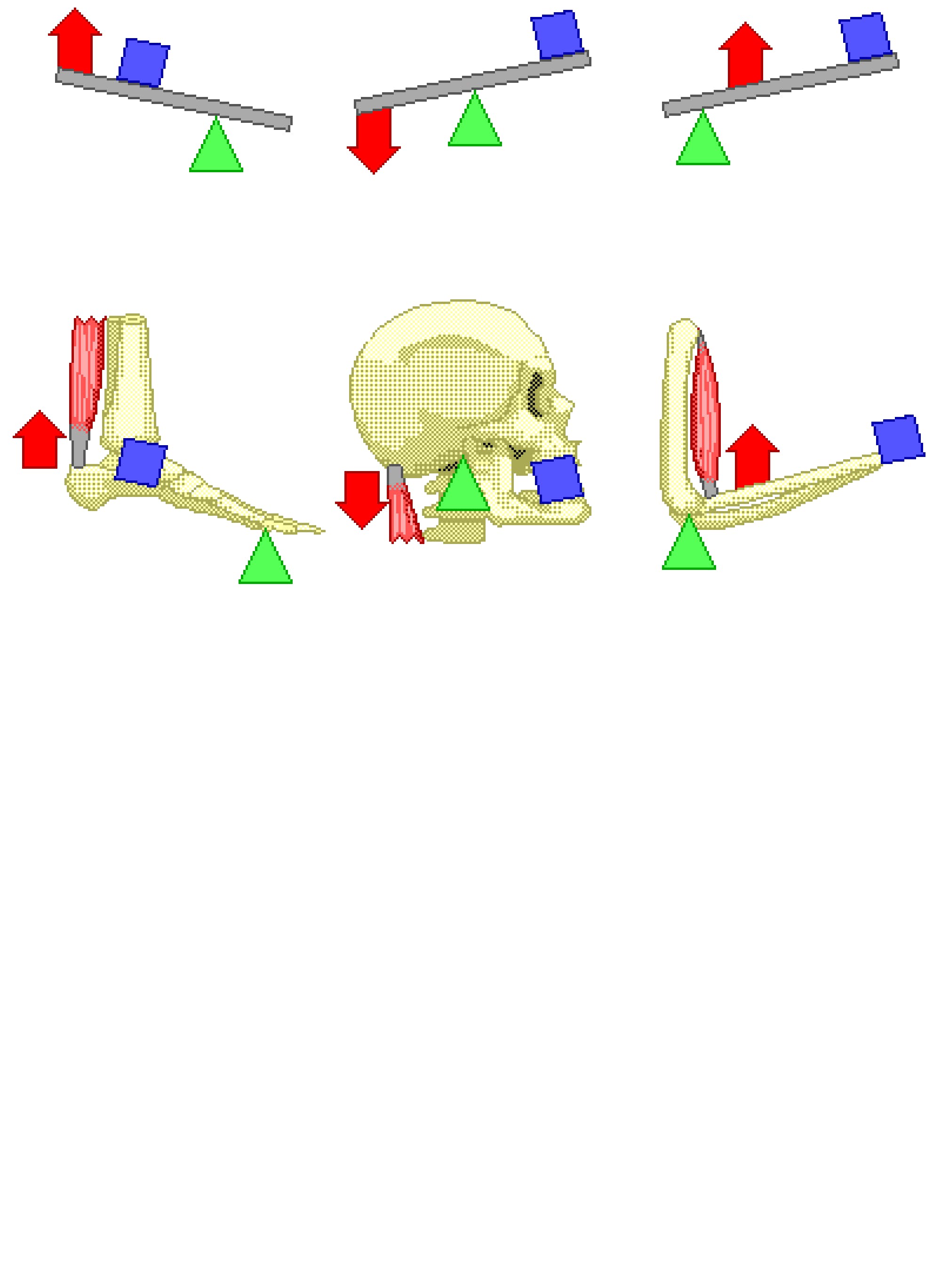