Lungs and Respiratory System of the Chest (Posterior View)

The respiratory system of the upper abdomen and chest includes the structures involved in the vital delivery of atmospheric air and the exchange of gases between the body and atmospheric air. The human body requires a constant supply of oxygen from the atmosphere for the cellular growth and metabolism that keep the body alive. At the same time, carbon dioxide that forms as a waste product of cellular metabolism must be eliminated from the body and released into the atmosphere before reaching toxic levels. Continue Scrolling To Read More Below... 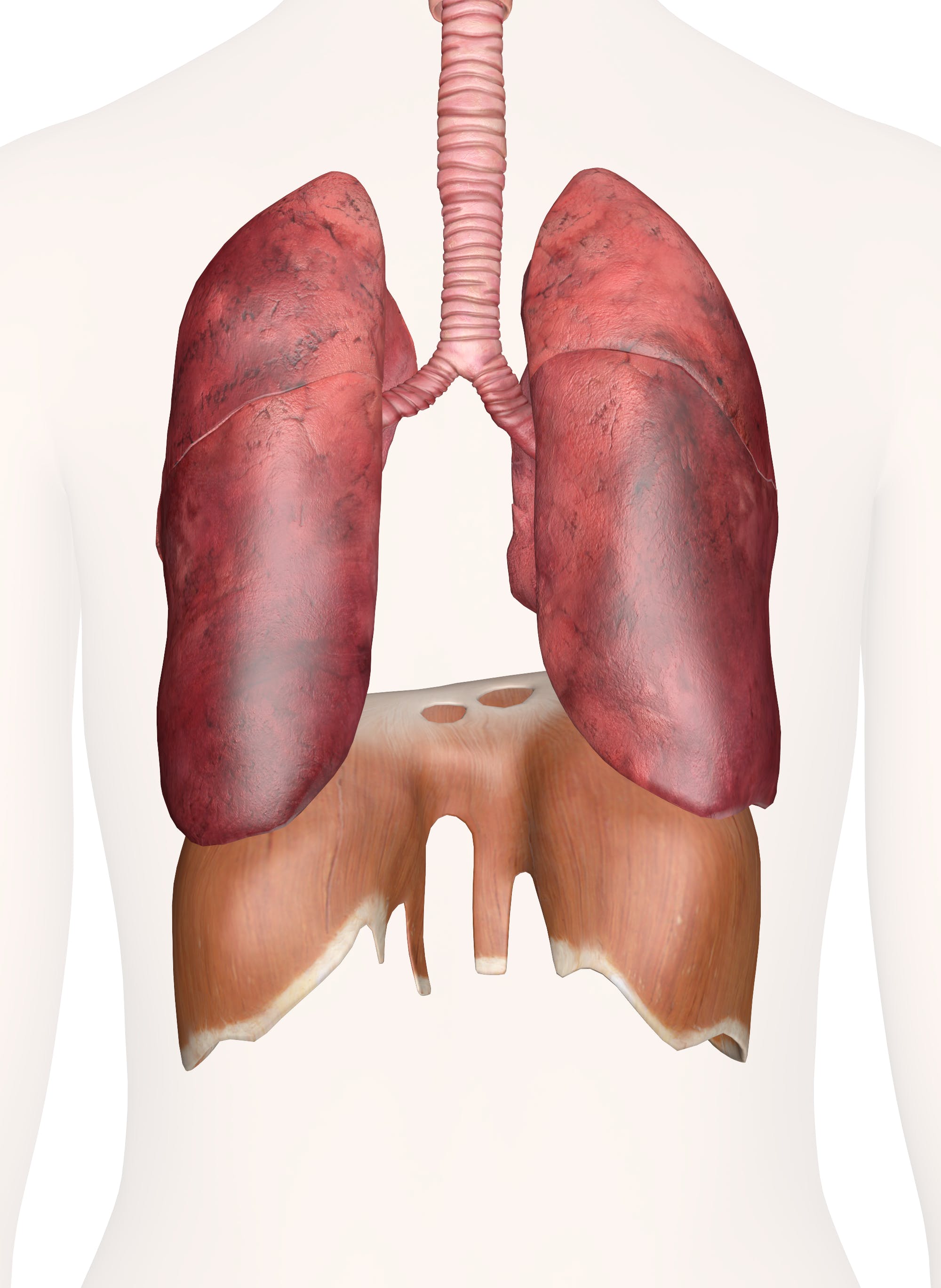 Atmospheric air enters the body through the mouth and nose and arrives in the chest through the trachea, or windpipe. The trachea is a large open tube lined with rings of cartilage. The cartilage of the trachea provides a flexible rigidity that maintains an open airway to and from the lungs at all times. At its inferior end the trachea branches into two bronchi that each enter one of the lungs. Inside the lung each bronchi further branches into several smaller secondary bronchi, which in turn further branch into many smaller tertiary bronchi and finally branch into many tiny, flexible bronchioles. These air passages are collectively known as the bronchial tree and serve to deliver air to the millions of tiny cup-like alveoli found throughout each lung.

The inner lining of the bronchial tree is made of ciliated simple columnar epithelium with goblet cells. Goblet cells produce sticky mucus to trap particles suspended in atmospheric air such as dust, pollen, and pathogens that could sicken the body. Hair-like cilia on the surface of the columnar cells wave rhythmically to move mucus away from the lungs and toward the end of the trachea where it can be coughed out of the body or into the digestive tract and swallowed into the stomach.

The lungs, a pair of large, spongy organs, are found flanking the heart on either side of the thoracic cavity. The lungs take up nearly all of the space within the thoracic cavity that is not occupied by any other organ and stretch from the vertebrae laterally and anteriorly to the sides of the heart. The lungs are highly vascular due to massive capillary beds within their tissue and the many arteries and veins carrying blood to and from the heart. The lungs are also very spongy due to the millions of tiny hollow alveoli that receive atmospheric air from the respiratory tree.

Smooth muscle cells in the walls of the bronchioles adjust their diameter and help to control the flow of air into the alveoli of the lungs. The alveoli are the functional units of the lungs that allow gases to be exchanged between the atmospheric air and the blood. Each alveolus is a cup of thin simple squamous epithelial tissue surrounded by many capillaries. The blood in the capillaries passes very close to the air inside the alveolus and is able to exchange carbon dioxide and oxygen through the simple squamous epithelial tissue. Oxygen and carbon dioxide both diffuse along concentration gradients, whereby the relatively higher concentration of oxygen in the air pushes oxygen into the blood while the higher concentration of carbon dioxide in the blood pushes carbon dioxide into the atmospheric air.