The T7 vertebra is the seventh thoracic vertebra, found in the middle of the chest between the seventh and eighth pairs of ribs. It plays important roles in the support of the spinal cord, ribcage, and muscles of the chest.

The T7 vertebra is located in the middle of the thoracic spinal column inferior to the T6 vertebra and superior to the T8 vertebra. Continue Scrolling To Read More Below... 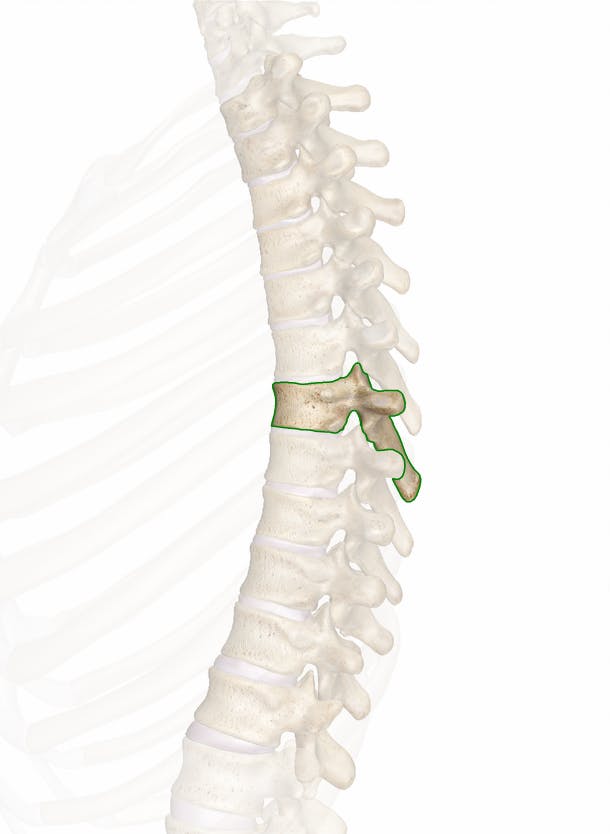 The anterior portion of the T7 vertebra is made of a wide, heart-shaped cylinder of bone known as the centrum or vertebral body. The centrum provides most of the strength to the vertebra and connects it to the surrounding vertebrae via the intervertebral disks. Intervertebral disks are thin bands of fibrocartilage surrounding a gel-like center known as the nucleus pulposus. Fibrocartilage forms strong yet flexible connections between the centrums of neighboring vertebrae, while the nucleus pulposus acts as a shock absorber for the spine. On the lateral sides of the centrum are two small indentations known as demifacets that form joints with the ribs. The superior demifacet aligns with the inferior demifacet of the T6 vertebra to form the vertebrocostal joint with the seventh rib. The inferior demifacet similarly aligns with the superior demifacet of the T8 vertebra to form the vertebrocostal joint of the eighth rib. Both vertebrocostal joints are planar synovial joints that allow the ribs to glide slightly relative to the position of the vertebral column.

The structure of the T7 vertebra allows it to form an important part of the ribcage. The spinous process descends posterior to the T8 vertebra to help lock the thoracic vertebra in a stiff, solid column with little room for rotation or lateral movement. Facets in the centrum and transverse processes form planar synovial joints to help to hold ribs in place while providing slight gliding movement. The superior and inferior articular processes allow the thoracic vertebrae to flex and extend the torso in the anterior-posterior direction with little lateral movement.

Many muscles that move the torso attach to the T7 vertebra. In particular, the multifidus and rotatores muscles attach to the transverse processes to rotate the spine. The trapezius and latissimus dorsi muscles of the back attach to the T7 at its spinous process.