Nerves of the Abdomen, Lower Back and Pelvis (Male View)

As the spinal cord descends through the vertebral canal of the lower back, it tapers to a point known as the conus medullaris around the L2 vertebra. Continue Scrolling To Read More Below... 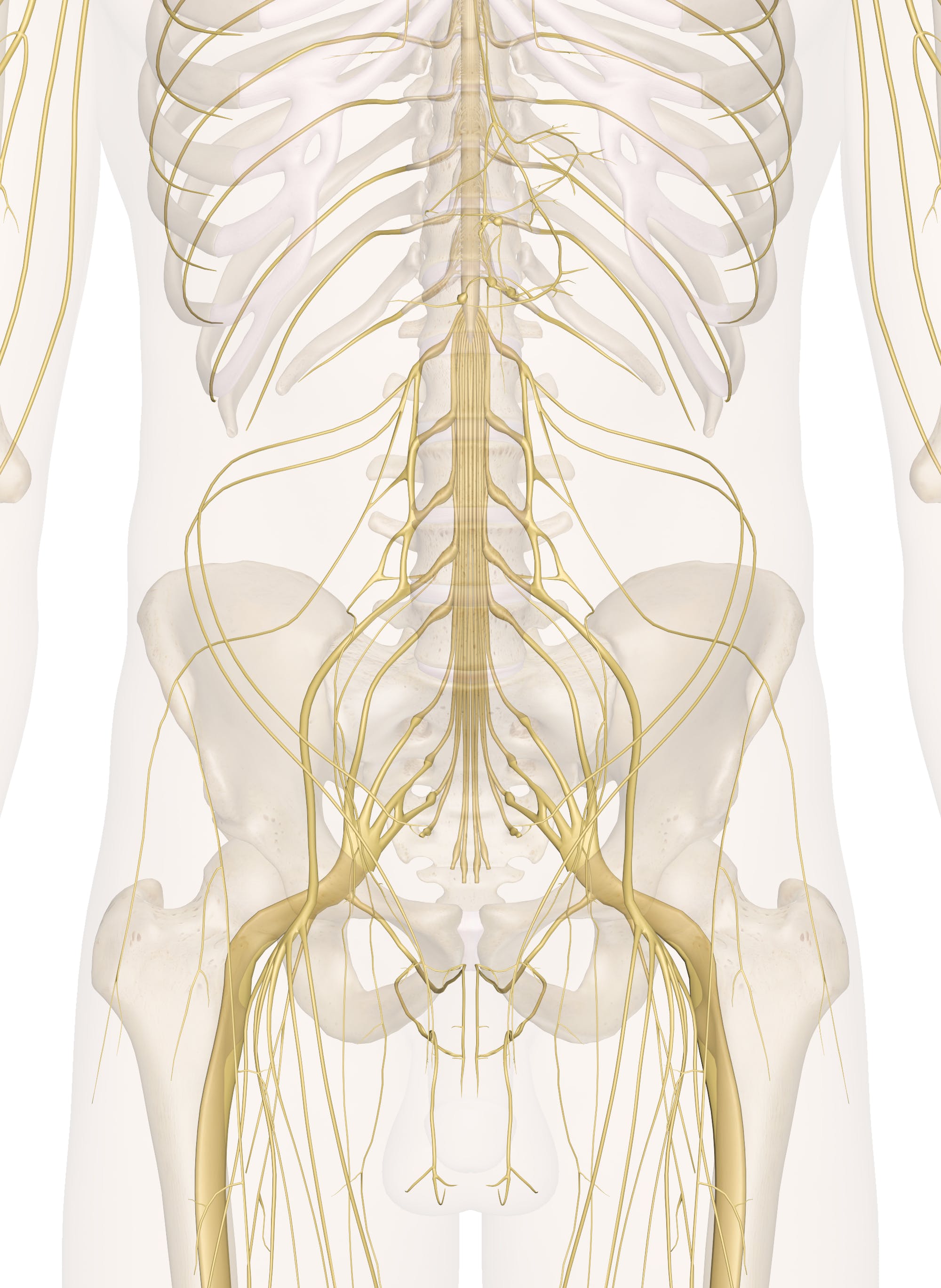 Continued From Above... The actual point of tapering is dependent on an individual’s age and height as the spinal cord completes its longitudinal growth during infancy, long before the growth spurts of childhood and adolescence. From the conus medullaris many individual spinal nerves descend through the vertebral canal of the lumbar and sacral spine in a structure known as the cauda equina, which is Latin for “horse’s tail.” Each pair of spinal nerves in the cauda equina exits the vertebral canal at foramen between the vertebrae of the lumbar spine or in the sacrum.

The spinal nerves of the lower back also carry many neurons of the autonomic nervous system (ANS) that maintain the vital involuntary processes of the digestive, urinary, endocrine, and reproductive systems. Neurons from the sympathetic division of the ANS extend from the spinal cord to form nerves that meet at several autonomic ganglia in the abdomen. Each autonomic ganglion, such as the celiac ganglion, forms a plexus of nerve fibers that extend to the organs of the abdomen and pelvis to control their function.

The parasympathetic division of the ANS is also represented in the abdomen and pelvis through the vagus nerve and the sacral nerves. The vagus nerve is a cranial nerve that wanders from the base of the brain parallel to the spinal cord to stimulate digestion in the liver, stomach, and intestines. Parasympathetic neurons in the spinal cord pass through the sacral nerves in the lower back to reach the pelvic organs such as the bladder and reproductive organs to control their functions. Between the opposing functions of the sympathetic and parasympathetic divisions of the ANS, the nervous system is effectively able to control all of the organs of the abdomen and pelvis.

A frequently overlooked portion of the nervous system is the enteric nervous system (ENS) found in the gastrointestinal tract. The ENS is a network of around 100 million neurons that regulate the functions of the digestive tract. The ENS monitors the contents of the gastrointestinal tract; decides how to digest its contents most effectively; and controls the movements of smooth muscles and the secretion of glands that results in the digestion of food to provide nutrients to the body. Although the brain is able to monitor and control the ENS through autonomic neurons, the ENS often works autonomously and can even function after its nervous connections to the brain have been destroyed.