The common peroneal nerve next descends into the leg, passing between the tendon of the biceps femoris and the lateral head of the gastrocnemius muscle. It immediately produces another branch, the lateral sural cutaneous nerve, that descends the leg superficial to the lateral head of the gastrocnemius and forms several branches that spread through the lateral posterior leg. One of the branches, the sural communicating branch, combines with a branch of the tibial nerve (the medial sural cutaneous branch) to form the sural nerve that descends into the foot parallel to the calcaneal (Achilles) tendon.

Finally, the common peroneal nerve ends in the leg when it divides into two terminal branches: the superficial peroneal nerve and the deep peroneal nerve. The superficial peroneal nerve descends along the lateral leg between the extensor digitorum longus and fibularis longus muscles and spreads into several branches in the top of the foot. It produces several motor branches that innervate the fibularis longus and fibularis brevis muscles and several cutaneous branches that innervate the skin of the lateral leg and dorsum of the foot. The deep peroneal nerve turns medially and passes deep to the muscles of the anterior compartment of the leg as it descends into the foot. It innervates the muscles of the anterior compartment of the leg, which are the tibialis anterior, extensor digitorum longus, fibularis tertius, and extensor hallucis longus.

The common peroneal nerve is a mixed nerve, which means that it carries both sensory signals to the brain from the body and motor signals from the brain to the muscles. Its sensory (cutaneous) branches provide information to the brain from sensory receptors in the skin and tissues of the lateral leg, dorsum of the foot, and the toes. The motor branches carry action potentials to stimulate the muscles of the anterior and lateral compartments of the leg. These muscles collectively dorsiflex and turn the foot outward at the ankle joint.

The common peroneal nerve may fail to transmit nerve signals temporarily if it is compressed or permanently if it is cut or severely damaged. When the common peroneal nerve ceases to transmit nerve signals, the most obvious signs are lack of sensation in the lateral leg and the dorsum of the foot and the inability to plantarflex the foot. The common name for this condition is foot drop, and is easily observed when a person walks and drags their toes instead of holding their toes slightly elevated from the ground. 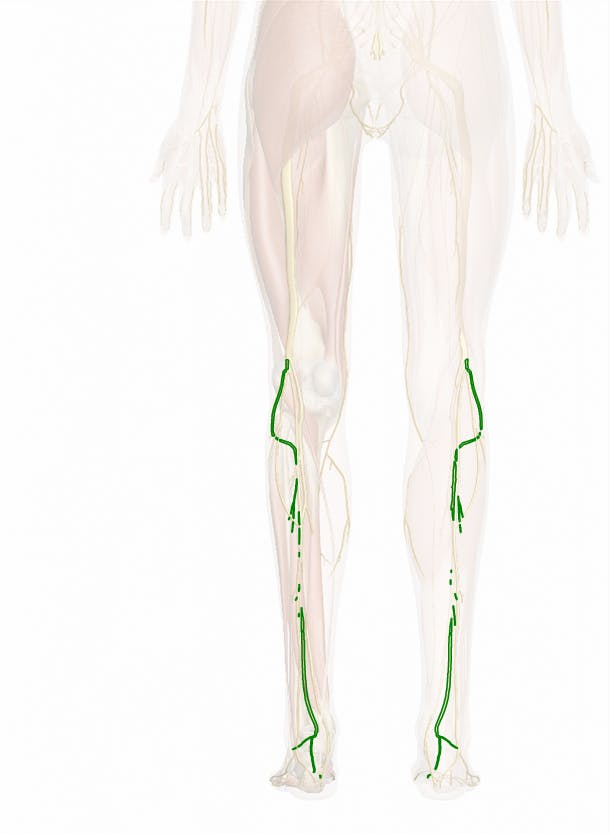