The inguinal nodes are a group of lymph nodes located in the inguinal, or groin, region of the body. They play a critical role in filtering lymph produced in the lower limbs as it enters the torso. The inguinal nodes swell due to infections and may also trap metastatic tumor cells that may spawn new tumors.

The inguinal nodes are around 12 small, spherical or bean-shaped masses of lymphatic tissue distributed throughout the inguinal region of the body. Most of these nodes are superficial nodes located in the subcutaneous layer, while a few deep nodes are found around the great saphenous vein deep to the fascia lata. The superficial inguinal nodes are distributed throughout a T-shaped region with the superior group in a horizontal band inferior to the inguinal ligament and the inferior group in a vertical band descending the thigh around the great saphenous vein. Each of the inguinal nodes connects to several afferent lymphatic vessels that deliver lymph to the nodes from the leg, thigh, buttock, and pelvis.

Structurally, the inguinal nodes are identical to all other lymph nodes in the body. They are bean-shaped, with a large convex side, two rounded ends, and a smaller concave side known as the hilus. The exterior of the lymph nodes is a hard capsule made of dense irregular fibrous connective tissue. Several trabeculae, or columns of fibrous connective tissue, extend from the capsule toward the center of the lymph nodes and act like walls to divide the lymph nodes into compartments. Lining the interior of the capsule and trabeculae are sinuses filled with reticular connective tissue. Deep to the sinuses are the cortex and medulla, where many immune cells, including T cells, B cells, dendritic cells, and macrophages, maintains the body’s immunity to diseases.

As lymph arrives in the inguinal nodes, it passes through many sinuses filled with reticular tissue. Reticular tissue acts like a filter to remove large particles from the lymph, such as bacteria, dead cells, and tumor cells. Wandering macrophages, a type of white blood cell, scour the sinuses for debris and remove it through phagocytosis. The network of sinuses ends at the hilus, where lymph exits the lymph nodes through efferent lymph vessels. Many of the inguinal nodes connect so that lymph is filtered multiple times before leaving the groin. After leaving the groin, the efferent lymphatic vessels ascend into the abdominal cavity, where they are further filtered by the external iliac nodes.

Another major function of the inguinal nodes is in the production of immune responses. Dendritic cells found throughout the areas filtered by inguinal nodes provide immunity to these areas by killing pathogens, such as bacteria and viruses. The dendritic cells absorb the antigens from the dead pathogens and migrate to lymphatic vessels. Dendritic cells travel with lymph once in the lymphatic vessels until they reach the inguinal lymph nodes. The dendritic cells then migrate into the cortex of the lymph node, where they present the pathogen antigen to T cells, which in turn initiate the immune response. 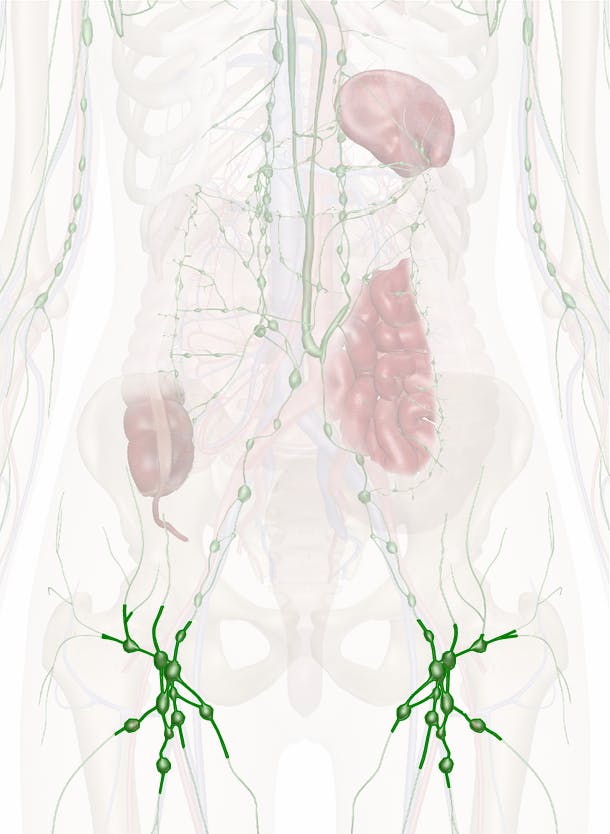