Endocrine Glands of the Head and Neck

The endocrine system of the head and neck includes the vital structures responsible for governing the release of hormones to the entire body and maintaining the body’s homeostasis. Hormones released into the bloodstream from glands in the head and neck are transported throughout the body to affect every body system.

The pineal gland, a small pinecone-shaped mass of glandular tissue in the brain, plays an important role in controlling the body’s sleep cycle. Continue Scrolling To Read More Below... 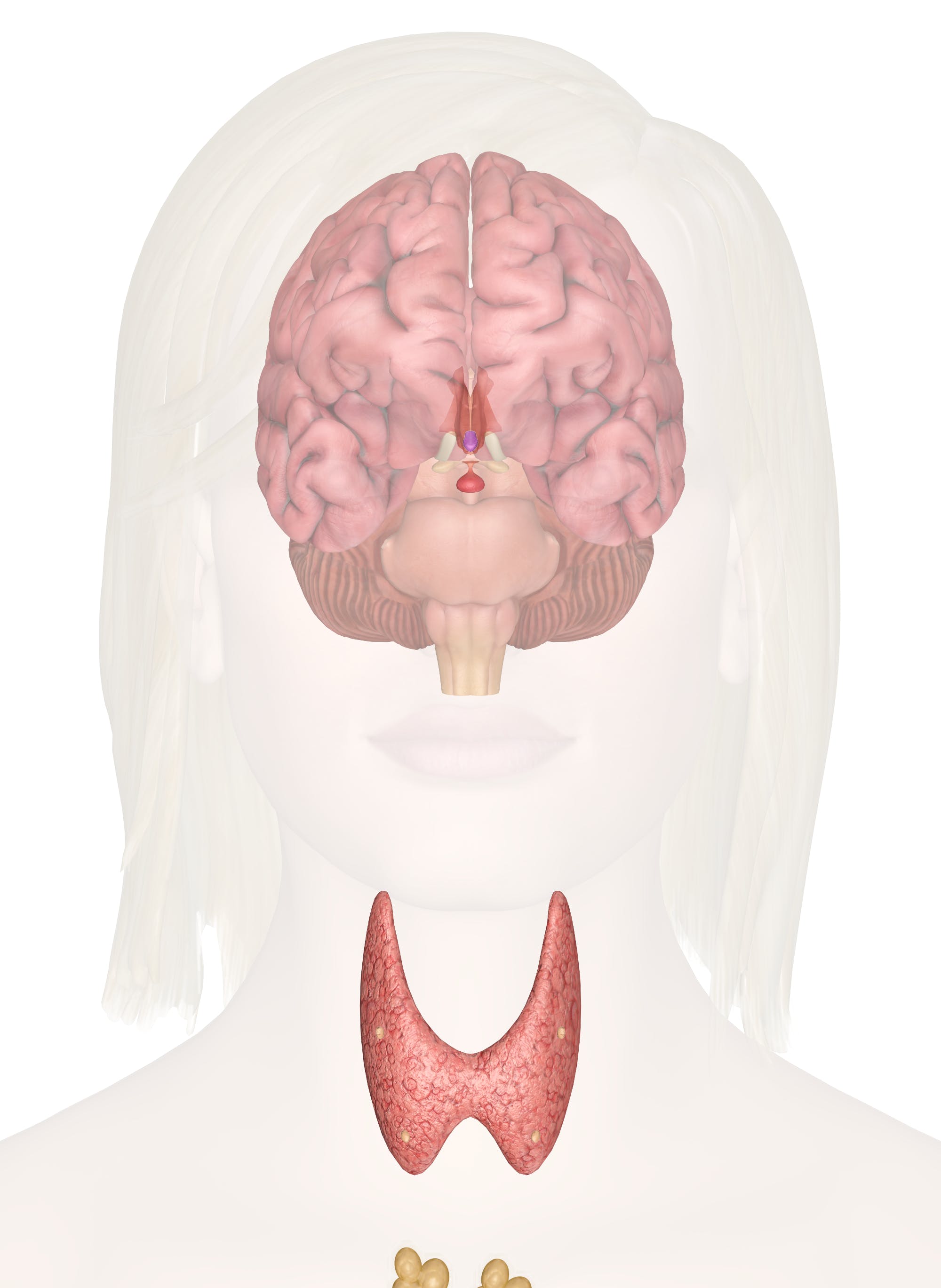 Continued From Above... The pineal gland is attached to the brain superior to the midbrain and posterior to the thalamus. Light striking the retinas of the eyes keeps the pineal gland inactive during the day, but in the absence of light the pineal gland produces the hormone melatonin. Melatonin has a sedative effect on the nervous system and helps to set the body’s sleep-wake cycle known as the circadian rhythm.

The pituitary gland is actually two distinct structures packaged together into one anatomical region. The anterior half of the pituitary gland, the adenohypophysis, is made of glandular epithelium and produces seven hormones:

Each of these hormone targets specific regions of the body, including other glands, to stimulate their metabolism. The posterior pituitary gland, or neurohypophysis, is made of nervous tissue and stores and releases oxytocin and vasopressin produced by the hypothalamus. Oxytocin has many functions in the body, but is mainly involved in the production of uterine contractions during childbirth and milk release from the mammary glands during breast-feeding. Vasopressin, also known as antidiuretic hormone, helps the body to retain water by inhibiting sweat glands and increasing the efficiency of the kidneys.

The thyroid gland, a butterfly-shaped mass of glandular tissue in the base of the neck, performs the vital function of controlling the body’s metabolism through its hormones triiodothyronine (T3) and thyroxine (T4). Both T3 and T4 are produced in response to TSH from the pituitary gland and boost the metabolic rate of many diverse cells throughout the body. Calcitonin, another important thyroid hormone, helps to regulate the body’s calcium levels by reducing the amount of calcium ion in the blood. Serious health problems can result when the thyroid doesn’t function properly. You can order a reliable home thyroid test to check the health of your thyroid.

On the posterior side of the thyroid gland are four small masses of glandular tissue known as the parathyroid glands. These glands produce parathyroid hormone (PTH), which acts as an antagonist to calcitonin by raising calcium ion levels in the blood. PTH stimulates osteoclast cells to dissolve the solid calcium matrix of bones to release calcium ions. Calcium ions play a vital role in the contraction of muscle cells and the conduction of nerve signals in neurons that keep the body alive. Between the actions of calcitonin and PTH, the body can maintain the homeostasis of calcium in the blood and skeleton to support healthy muscles, nerves, and bones.