Cardiovascular System of the Arm and Hand

The cardiovascular system of the upper limbs plays the vital role of ensuring the adequate flow of blood to and from the shoulders, arms, hands and fingers. Adequate flow of oxygenated blood to the tissues of the upper limbs is critical to their health through the delivery of oxygen, water, and nutrients. Blood flow also helps to regulate body temperature in this region and reduces the risk of frostbite of the fingers in extreme weather conditions.

Oxygenated blood exits the heart through the aorta and reaches the arms through the brachiocephalic trunk and the left and right subclavian arteries that run beneath the collar bones. Continue Scrolling To Read More Below... 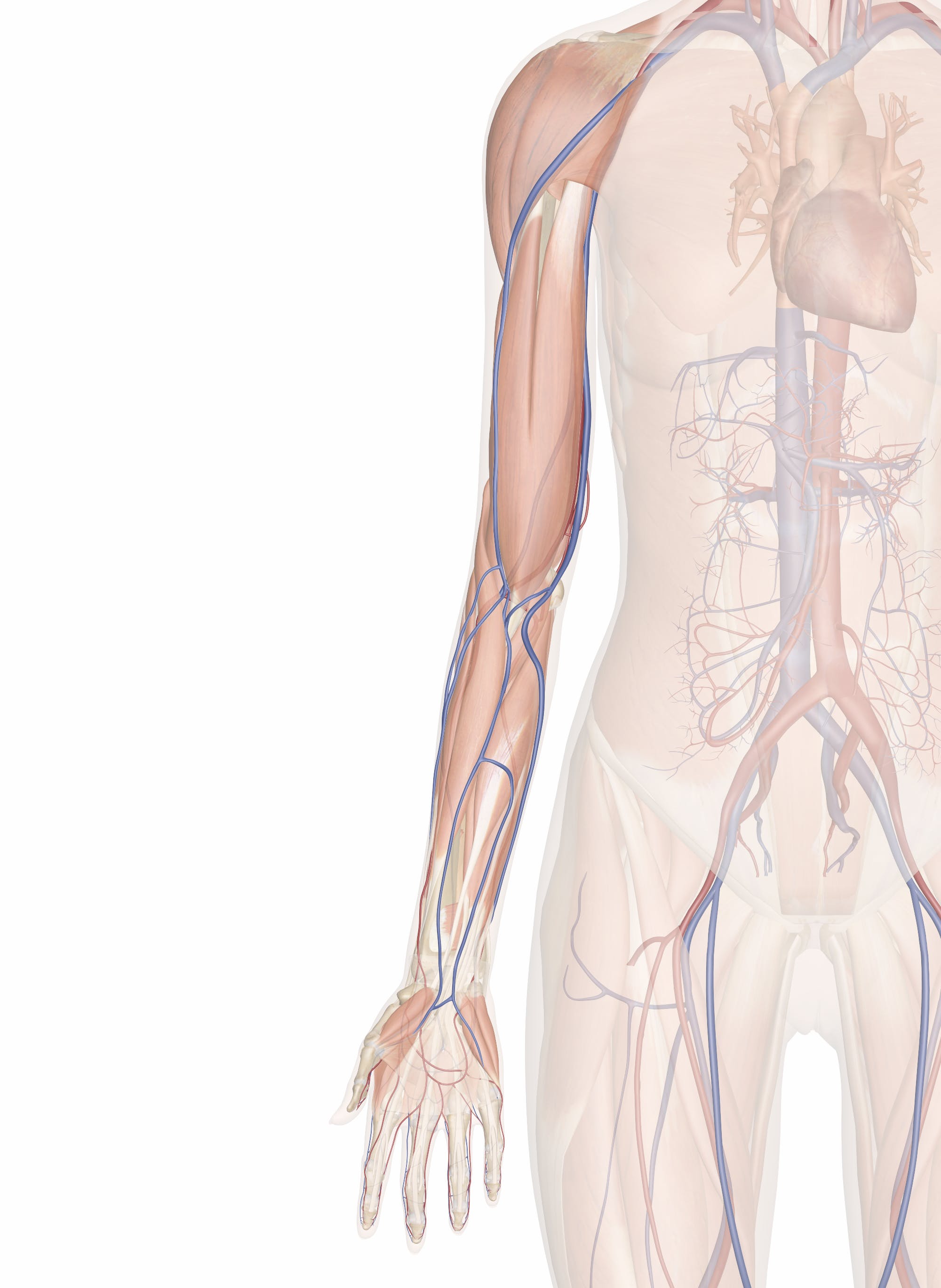 Continued From Above... The subclavian arteries continue through the armpits as the axillary arteries and then onward into the upper arms as the brachial arteries. Along the way, several smaller arteries branch off to provide blood flow to the tissues of the shoulders and upper arms. In each arm, the brachial artery passes laterally across the humerus just above the elbow, providing a convenient location for checking a patient’s blood pressure and pulse rate.

In the forearm region, the brachial artery divides into the radial and ulnar arteries. The radial artery supplies blood along the lateral side of the forearm and wrist just superficial to the radius bone. As the radial artery passes through the wrist, it approaches the surface of the skin, providing a convenient location for measuring pulse rate. The ulnar artery supplies blood along the medial side of the forearm and wrist just above the ulna bone. In the hand, the ulnar and radial arteries reconnect to form the superficial and deep palmar arches. Many smaller arteries, such as the palmar digital arteries and palmar metacarpal arteries, branch from the palmar arches to supply blood to the palm and fingers.

Deep veins in the upper limbs collect deoxygenated blood from deep tissues to be returned to the heart via a pathway parallel to that of the arteries. Starting in the hands, the palmar digital veins and palmar metacarpal veins deliver deoxygenated blood from the tissues of the fingers and palm to the superficial and deep palmar venous arches. The palmar venous arches carry blood to the radial and ulnar veins, which run parallel to the arteries of the same name before combining in the upper arm to form the brachial vein. Deoxygenated blood continues to flow from the brachial vein to the axillary vein in the armpit and the subclavian vein, before forming the brachiocephalic vein with blood returning from the head.

A system of superficial veins runs parallel to the deep veins to return blood from the superficial tissues to the heart. Many of the superficial veins are visible through the skin due to their proximity to the body’s surface. A network of many veins, including the palmar venous plexus and palmar venous arches, collects blood from the palm and delivers it to the veins of the forearm. The cephalic, median antebrachial, and basilic veins carry blood through the arms until they join the deep veins at the brachial vein.