Extending from the inferior end of the large intestine’s cecum, the human appendix is a narrow pouch of tissue whose resemblance to a worm inspired its alternate name, vermiform (worm-like) appendix. It is located in the right iliac region of the abdomen (in the lower right-hand abdominal area), measuring about four inches long and roughly a quarter of an inch in diameter.

Like the rest of the digestive tract, the appendix is made of an inner layer of mucosa with submucosa, muscularis, and serosa layers surrounding it. Continue Scrolling To Read More Below... 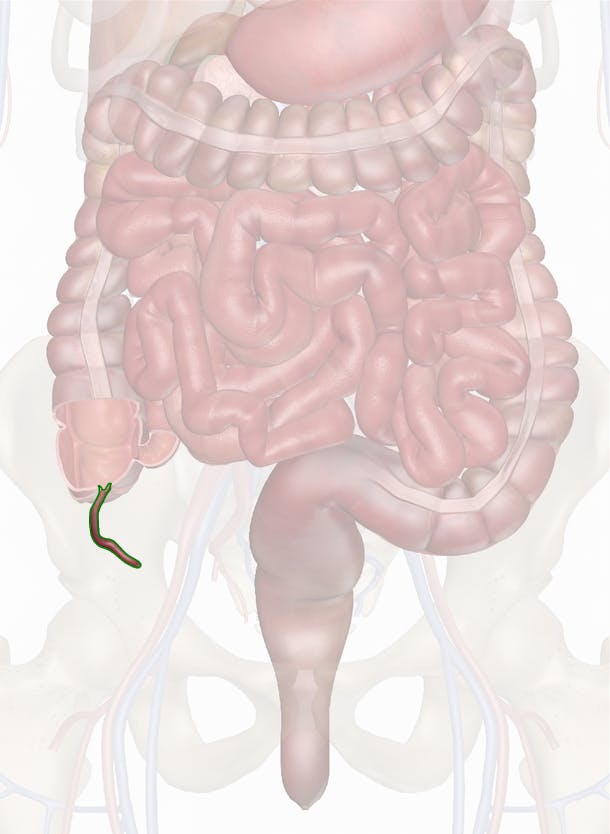 What Does the Appendix Do?

The appendix is not a vital organ and medical researchers still debate its exact function in our bodies. One hypothesis suggests that it is a vestigial remnant of a once larger cecum. This larger cecum would have been used by vegetarian ancestors to digest cellulose from plants. Supporters of this hypothesis therefore conclude that the appendix no longer serves any purpose for us.

Another hypothesis suggests that the appendix acts as a storage area for beneficial bacteria during times of illness. Beneficial bacteria living in the appendix could survive being flushed out of the large intestine by diarrhea. The appendix would therefore help a person to recover more rapidly from illness by enabling the bacteria to re-colonize the intestines after the illness has passed.

Doctors typically remove an appendix if it becomes inflamed, and even a healthy appendix may be removed during abdominal surgeries such as a hysterectomy. A doctor’s justification for this removal is that the appendix is susceptible to bacterial infections that lead to appendicitis, a fairly common and dangerous inflammation of the appendix. Often one of the first signs of appendicitis is pain and tenderness near the navel, often growing sharper and spreading downward into the lower right abdomen. The pain can grow quite severe over the course of a few hours, so much so that it may be impossible to get comfortable or to move without pain. Applying pressure to the area will commonly cause pain that can sharpen after releasing the pressure (a phenomenon called “rebound tenderness”), though this is not always the case. Additional common symptoms include nausea, vomiting, fever and others.

Tenderness and growing pain in the right abdomen that is noticeable enough to cause considerable discomfort during movement or at rest warrants medical attention in order to reach a diagnosis and receive any necessary treatment. Untreated appendicitis can lead to the rupture of the appendix, a serious medical emergency wherein fecal matter leaks out of the cecum. Left untreated, the bacteria-laden fecal matter spreads throughout the abdominal cavity, where the bacteria begin to digest the peritoneum that lines the cavity. The infection and inflammation of the peritoneum, known as peritonitis, is a severely painful and potentially fatal consequence of appendicitis.