Bones of the Arm and Hand (Posterior View)

The bones of the arm and hand have the important jobs of supporting the upper limb and providing attachment points for the muscles that move the upper limb. These bones form joints that provide a wide range of motion and flexibility needed to manipulate objects deftly with the arm and hand. They also provide strength to resist the extreme forces and stresses acting upon the arms and hands during sports, exercise, and heavy labor. Continue Scrolling To Read More Below... 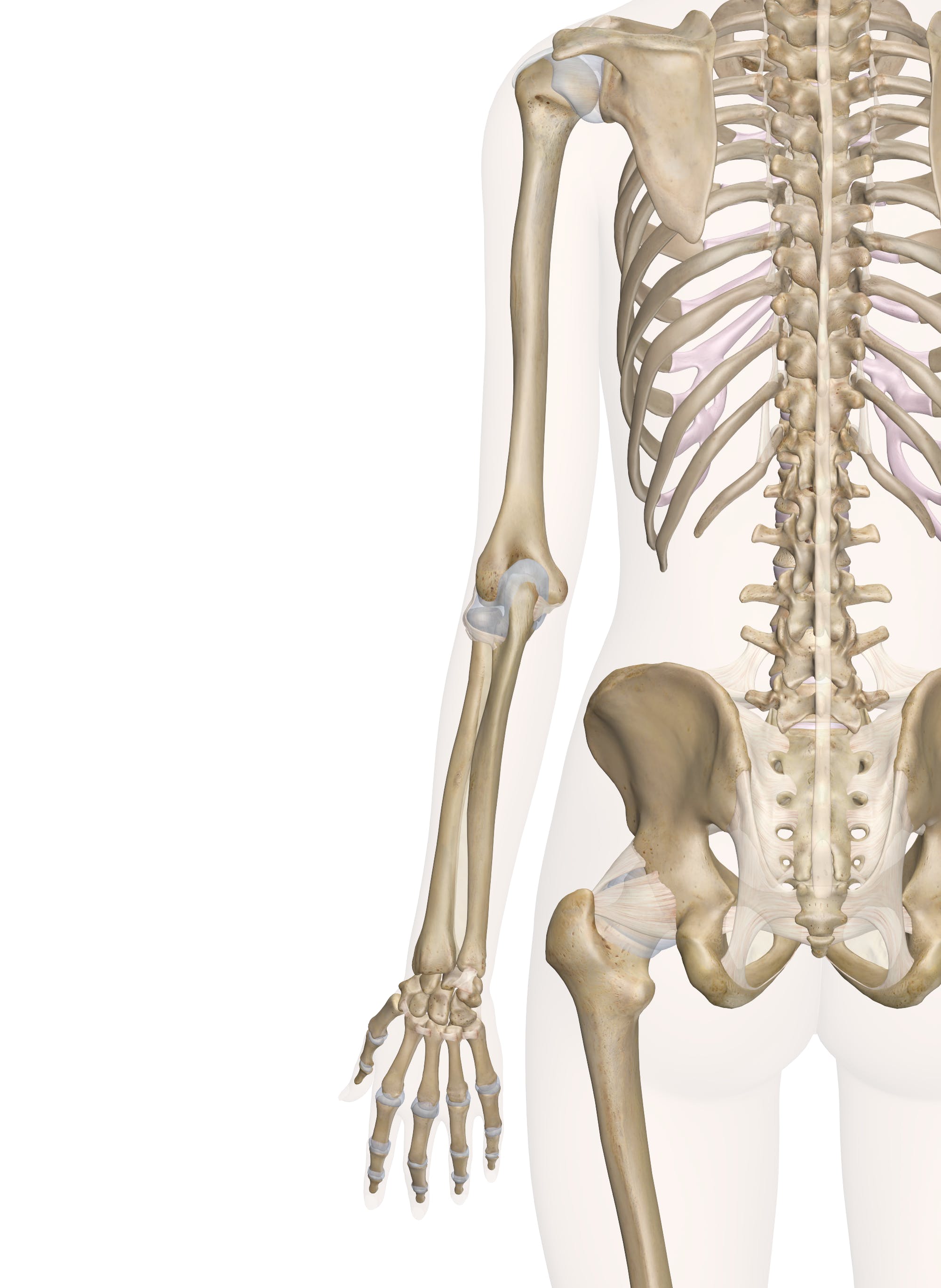 Consisting of the clavicle (collar bone) and scapula (shoulder blade), the pectoral girdle forms the attachment point between the arm and the chest. The clavicle, which gets its name from the Latin word for key, is a long bone that connects the scapula to the sternum (breast bone) of the chest. It is located just under the skin in the thoracic region between the shoulder and the base of the neck. The clavicle is slightly curved like a letter S and is about five inches in length. Two joints are formed by the clavicle — the sternoclavicular joint with the sternum, and the acromioclavicular joint with the acromion of the scapula. The clavicle permits the shoulder joint to move in circles while remaining attached to the bones of the chest.

Posterior to the clavicle is the scapula, a flat, triangular bone located lateral to the thoracic spine in the dorsal region of the body. The scapula forms two joints — the acromioclavicular (AC) joint with the clavicle and the shoulder (humeroscapular) joint with the humerus. The glenoid cavity is located on the lateral end of the scapula and forms the socket for the ball-and-socket shoulder joint. Many muscles attach to the scapula to move the shoulder, including the trapezius, deltoid, rhomboids, and the muscles of the rotator cuff.

The humerus is the only bone of the upper arm. It is a long, large bone that extends from the scapula of the shoulder to the ulna and radius of the lower arm. The proximal end of the humerus, known as the head, is a round structure that forms the ball of the ball-and-socket shoulder joint. On its distal end, the humerus forms a wide, cylindrical process that meets the ulna and radius to form the inner hinge of the elbow joint. The pectoral, deltoid, latissimus dorsi, and rotator cuff muscles attach to the humerus to rotate, raise, and lower the arm at the shoulder joint.

Our forearm contains two long, parallel bones: the ulna and the radius. The ulna is the longer and larger of the two bones, residing on the medial (pinky finger) side of the forearm. It is widest at its proximal end and narrows considerably at its distal end. At its proximal end, the ulna forms the hinge of the elbow joint with the humerus. The end of the ulna, known as the olecranon, extends past the humerus and forms the bony tip of the elbow. At its distal end, the ulna forms the wrist joint with the radius and the carpals.

Despite being such a small region of the body, the hand contains twenty-seven tiny bones and many flexible joints.

Our arms and hands require a balance of strength and dexterity to perform diverse tasks such as lifting heavy boxes, swimming, playing a musical instrument, and writing. The joints of the arm and hand permit a wide range of motion while maintaining the strength of the upper limb. Many skeletal muscles attach to and pull on these bones to move them with strength, speed, and accuracy. Like all bones of the body, upper limb bones help the body to maintain homeostasis by storing minerals and fats and by producing blood cells in the red bone marrow.