The frontal bone is a bone of the skull found in the forehead region. It is one of eight bones that form the cranium, or brain case. The frontal bone plays a vital role in supporting and protecting the delicate nervous tissue of the brain. It gives shape to the skull and supports several muscles of the head.

The frontal bone is a bowl-shaped bone in the frontal (forehead) region of the skull. It is located superior to the nasal bones and maxillae and anterior to the parietal bones. Continue Scrolling To Read More Below... 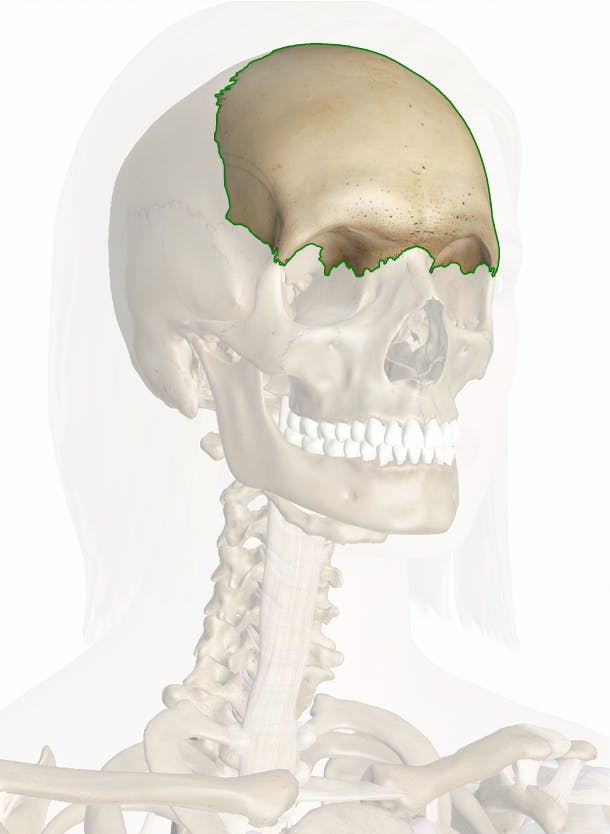 At the inferior end of the supraorbital ridge are the supraorbital margins, where the frontal bone makes a sharp angle to form the superior and medial margins of the orbits. Inside the orbits, the frontal bone continues inferiorly along the medial margin until it meets the ethmoid and lacrimal bones. It continues posteriorly along the superior margin until joining with the sphenoid bone.

Medial to the supraorbital ridges is the glabella, a small depression that ends inferiorly at the nasal bones. Superior to the glabella and supraorbital ridges is the squamous region, where the frontal bone is smooth and slopes posteriorly toward the partietal bones. A midsagittal suture is often present in the glabella and squamous region, especially in infants and young children. This frontal suture is indicative of the frontal bone’s prenatal development from two individual fetal bones.

Two major muscles of the face — the temporalis and orbicularis oculi — form origins on the frontal bone. The frontalis muscle, which forms the frontal belly of the epicranius muscle, passes over the smooth squamous region of the frontal bone to attach the skin of the brow to the galea aponeurotica on top of the head.

The frontal bone is classified as a flat bone due to its relatively thin and flat shape. Like all flat bones, the frontal bone has spongy bone in its center, surrounded by a thin layer of compact bone on its inner and outer surfaces. Between the columns of spongy bone is red bone marrow that produces blood cells through hematopoiesis. Pluripotent stem cells in the red marrow divide repeatedly throughout a lifetime to produce many daughter cells. These daughter cells differentiate to form all of the red blood cells, white blood cells, and platelets that circulate in the blood.