The uterus, or womb, is a hollow, muscular organ located in the pelvic cavity of the female body posterior to the urinary bladder and anterior to the rectum. Continue Scrolling To Read More Below... 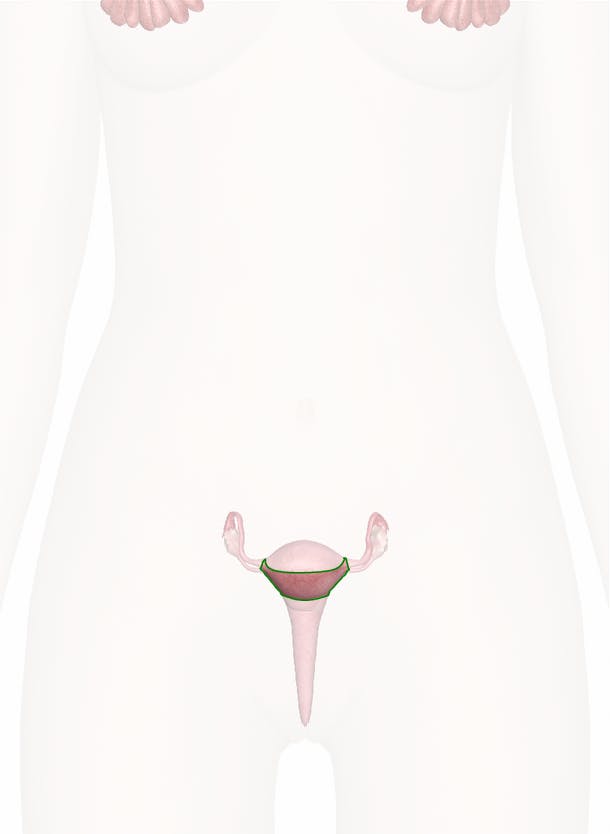 The corpus of the uterus can be divided into three distinct tissue layers, with each layer performing a specific function within the organ.

The body of the uterus plays an important role in the female reproductive system during pregnancy and childbirth. During each menstrual cycle, the lining of the endometrium begins to grow and develop under the influence of female sex hormones in preparation for a zygote, or fertilized egg cell. If no zygote forms within about two weeks after ovulation, the uterine lining deteriorates and sloughs off as menses during menstruation. In the case of successful fertilization, the zygote implants itself into the uterine lining and is nurtured by the tissues of the endometrium as it grows into an embryo. Eventually the embryo grows a placenta into the endometrium to provide the vital exchange of gases, nutrients, and wastes between the fetal and maternal blood supplies. The body of the uterus also expands greatly during the later stages of pregnancy to accommodate the growing fetus. By the end of the thirty-six weeks of pregnancy, the body of the uterus has stretched to several times its normal size to accommodate the fetus, amniotic fluid, and placenta.

The body of the uterus also plays a vital role in the process of childbirth. Changing hormone levels near the end of pregnancy stimulate the smooth muscle tissue of the uterus to begin mild waves of contraction. Hormone levels continue to increase and trigger longer, stronger, and more regular contractions of the myometrium. Each contraction begins to push the fetus slowly out of the body of the uterus and into the cervix, which has been widening and opening under the influence of the same hormones. After many contractions, the smooth muscle of the myometrium propels the fetus out of the uterus, through the vaginal canal, and through the external vaginal orifice into the outside world.