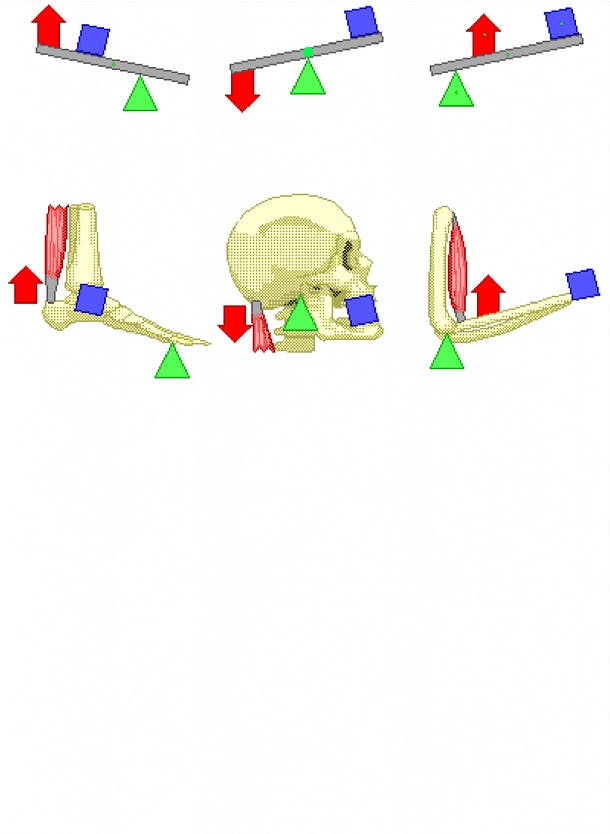 In the human body, a bone forms the lever and the fulcrum is a joint where a bone can move around the pivot point. The effort force is provided by muscles and is applied to the lever system at the point where the muscle’s tendon attaches to the bone serving as the lever. The load or resistance in anatomical lever systems varies by the specific case, but always refers to the mass borne or moved by the bone. For example, the atlanto-occipital joint in the neck bears the mass of the head, while the elbow joint moves the forearm and any mass held in the hand, like a dumbbell.

First class lever systems provide a way for the body to change the direction, speed, and strength of movement at a joint. All first class levers reverse the direction of movement like a seesaw, so that applying force in one direction results in the load moving the opposite direction. This arrangement is useful in the neck and limbs, where it is advantageous to place muscles closer to the trunk or center of the body. Less muscle in the extremities means less muscle mass to move, resulting in faster and easier movements. This also explains why the thighs and upper arms are more massive than the forearms, hands, legs, and feet.

Also, first class levers can either multiply the speed of muscle movements in exchange for decreased strength, or multiply the force of muscles in exchange for decreased speed. The position of the fulcrum in the lever system determines the balance between speed and strength. When the fulcrum is equidistant between the force and load, the lever system only changes the direction of movement. As the fulcrum approaches the load, the load’s range and speed of movement decrease. This decrease in speed is balanced by an increase in the distance moved by the muscle and the relative force applied to the load increases. The net result of this arrangement is a force multiplier and a speed divider. Conversely, when the fulcrum is located closer to the effort force, a small muscle contraction moves the load a long distance. This setup multiplies the speed of the movements in the lever system at the cost of decreased strength.

In both the atlanto-occipital and elbow joints, the first class lever system is designed to increase the speed of the system at the cost of muscle strength. Small contractions of the trapezius muscle in the neck pull on the occipital bone of the skull, causing it to pivot at the atlanto-occipital joint. The downward pull extends the head and raises the face superiorly. In the elbow joint, the triceps brachii muscle attaches to the olecranon process of the ulna posterior to the elbow joint. When the triceps contracts, it pulls the olecranon process proximally, swinging the ulna distally and extending the forearm. Because the olecranon process is so much shorter than the forearm, very small contractions of the triceps result in a large range of motion and speed in the hand and forearm.