The internal iliac artery is one of the major arteries of the pelvis. It plays a vital role in providing oxygenated blood to the organs and tissues of the pelvis, including the urinary bladder, reproductive organs, and muscles of the lower back, buttock, and hip. The branches of the internal iliac artery vary widely between individuals, especially between the sexes, due to the differences between the male and female reproductive systems.

The posterior branch of the internal iliac artery divides into three branches: the iliolumbar, lateral sacral, and superior gluteal arteries. Each of these arteries provides blood to the muscles, bones, and tissues of the lower back, buttock, and thigh. The iliolumbar artery further divides into the iliac and lumbar arteries and delivers blood to the vertebral canal and several muscles, including the psoas major and iliacus. Perfusing the sacral region is the lateral sacral artery, which splits into superior and inferior branches to reach the sacrum, erector spinae and piriformis muscles, and the skin and tissues covering the sacrum. The largest artery to arise from the posterior branch is the superior gluteal artery, which exits the pelvis and spreads throughout the muscles of the buttocks and lateral thigh. It provides blood to the gluteus maximus, gluteus medius, and gluteus minimus in the buttock and the tensor fascia latae muscle of the lateral thigh.

Histologically, the internal iliac artery and its branches are consistent with the muscular arteries of the body and contain three distinct tissue layers. The innermost layer, the tunica intima, consists of a lining of endothelium surrounding the hollow lumen in the center of the artery and a thin layer of supporting areolar connective tissue. Endothelium is a special form of simple squamous epithelium that holds blood within the vessel, prevents blood clots from forming, and provides a smooth surface to aid blood flow. Surrounding the tunica intima is the tunica media, which contains smooth muscle cells and elastic fibers. The tunica media strengthens the blood vessel to resist blood pressure and allows the vessel to stretch or contract as needed to regulate blood flow. Finally, the tunica externa is the outermost layer of collagen fibers that provides strength to the artery and anchors it to the surrounding tissues.

The internal iliac artery and its branches can regulate the flow of blood into the organs they perfuse through contraction of smooth muscle in the tunica media. In response to sympathetic stimulation by the autonomic nervous system, the smooth muscle tissue in the tunica media contracts, reducing the size of the lumen. Decreased lumen size reduces the volume of blood flowing through the artery and reduces the delivery of blood to the tissues. This change in blood flow is necessary to balance the body’s energy demands during stressful fight-or-flight situations, such as an accident or emergency. 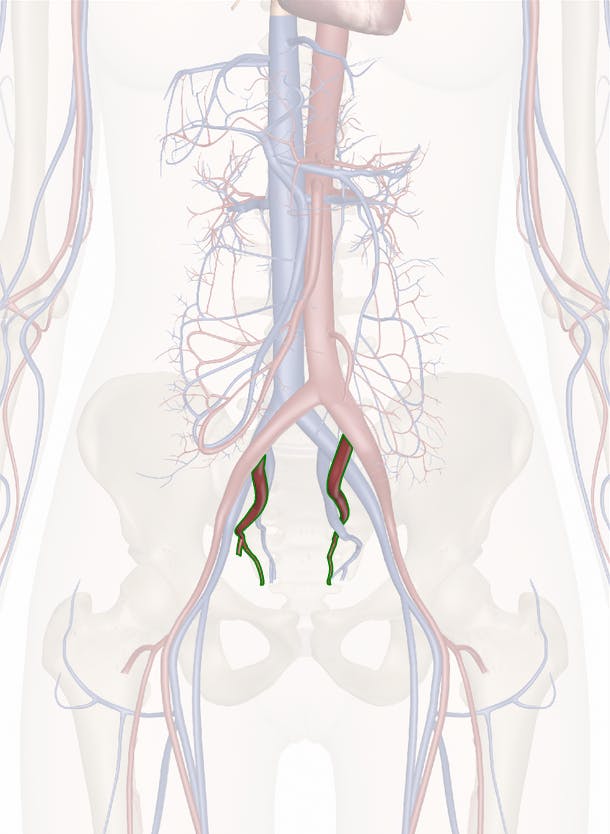