The median nerve next crosses the wrist joint, passing through the carpal tunnel as it enters the palmar region of the hand. In the palm, it divides into four common palmar digital branches, which extend toward the digits before dividing into the proper palmar digital branches that enter the first four digits of the hand. The recurrent branch of the median nerve turns toward the thenar muscles that control the thumb while a pair of smaller branches innervate the first and second lumbrical muscles in the palm.

The median nerve plays a vital role in the function of the upper limb by innervating many of the anterior muscles of the forearm. Through its branches in the forearm, it innervates the palmaris longus and flexor carpi radialis muscles that flex the hand at the wrist, and the pronator teres muscle that pronates the hand at the wrist. The median nerve also innervates the flexor digitorum superficialis muscle that flexes the digits of the hand. Its interosseous branch innervates the deep muscles of the forearm, including the flexor digitorum profundus, which also flexes the digits of the hand; the flexor pollicis longus, which flexes the thumb; and the pronator quadratus, which pronates the hand at the wrist.

In the hand, the median nerve plays another vital role by innervating the three thenar muscles that control the thumb and two of the lumbrical muscles. The thenar muscles include the flexor pollicis brevis, which flexes the thumb at the metacarpophalangeal joint, and the abductor pollicis brevis which abducts the thumb. Playing an especially critical role in the function of the hand is the third thenar muscle (the opponens pollicis) which opposes the thumb against the other digits and allows objects to be held in the hand. In the palm, a pair of small branches extend to the first and second lumbrical muscles, which flex the index and middle fingers at the metacarpophalangeal joints and extend the same fingers at the interphalangeal joints.

In addition to its control of the muscles of the forearm and hand, the median nerve also carries important sensory information from the skin through its cutaneous branches. The palmar cutaneous branch sends signals from sensory receptors in the skin on the lateral side of the palm to the brain. In the hand, the digital cutaneous branches and their smaller branches provide sensory information from the palmar surface of the first three digits and the lateral side of the fourth digit (ring finger) and the dorsal surface of the distal segments of these digits surrounding the fingernails. 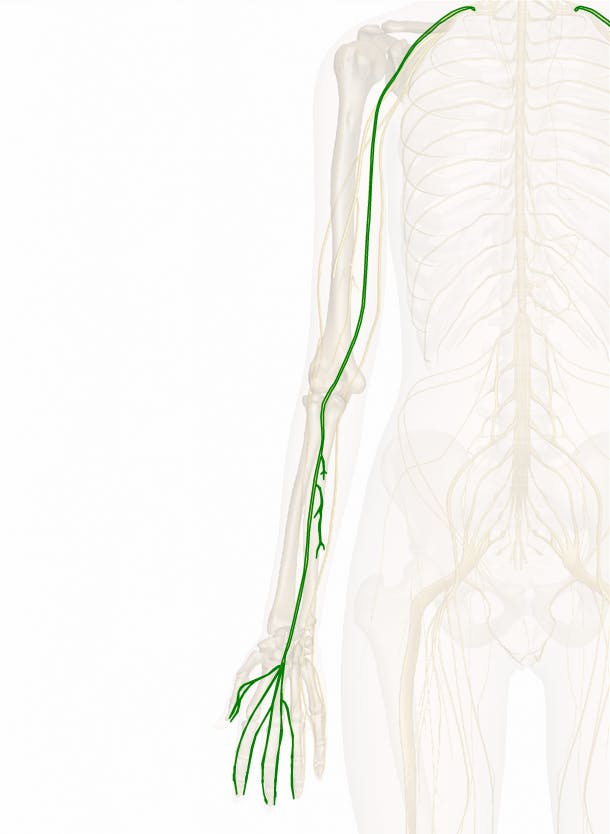