Cortical bone, also known as compact bone, forms the hard outer shell of all bones. It is the strongest and densest form of bone in the body. However, it also contains many tiny passages for blood vessels and nerves and houses the cells that repair and maintain bones.

Cortical bone is one of the two types of bone found in the human body. The other type of bone, cancellous (spongy) bone is always found deep to cortical bone and serves as an internal support structure. Continue Scrolling To Read More Below... 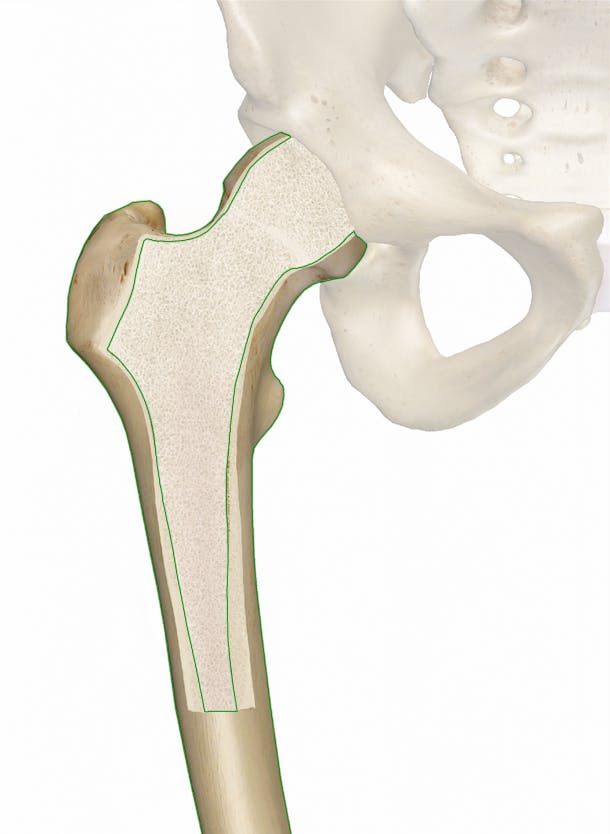 Continued From Above... Cortical bone is covered by the periosteum and is lined by endosteum in the diaphyses of long bones where it borders the medullary cavity.

Structurally, cortical bone is made of many microscopic cylinders called osteons, which surround tiny central canals. Each osteon is formed during fetal development when tiny blood vessels and nerve fibers pass through mesenchymal tissue containing osteogenic cells. These osteogenic cells begin to produce bone matrix and form a ring of bone matrix, known as a lamella, around the blood vessels and nerves. Once the lamella has formed, these osteogenic cells become known as osteocytes and remain trapped in the osseous tissue in tiny cavities known as lacunae. Osteogenic cells farther from the central canal form yet another lamella around the previous layer and become another group of osteocytes trapped in lacunae. These cells receive their nutrients and oxygen from the blood vessels by way of tiny canals known as canaliculi, which connect the lacuna and allow all of the osteocytes to remain in contact with one another. This process repeats several more times, resulting in several concentric layers of lamellae around the central canal. As nutrients and oxygen are passed from one osteocyte to another, eventually the cells are unable to support further layers of lamella. Additional blood vessels eventually develop near the existing osteon to form a new osteon and fuse to form a continuous layer of compact bone.

Cortical bone is the hardest and densest tissue in the human body. It is used to support and protect the soft tissues of the body and give the body shape. As stress is applied to specific regions of the body through weight bearing activities, the thickness of cortical bone may vary over time. A layer of osteoblast and osteoclast cells surrounds all cortical bone along the inner layer of the periosteum. When stresses are applied to the bone, the body responds by activating osteoblasts to produce mineral matrix and form additional layers of cortical bone. When stress on the bone decreases, osteoclast cells break down the mineral matrix to release mineral ions into the blood and reduce the bone’s mass. These processes help to control the strength and mass of bones depending on what the body’s activity level dictates. They also control mineral homeostasis by storing extra minerals in cortical bone or releasing minerals into the blood when the body is mineral-deficient.